How to record external instruments in Ableton Live?

Ableton Live almost gave me a headache the first time I tried to record an external hardware synthesizer into an Audio Track. I put an External Instrument device on a MIDI Track in Live and played the synthesizer with a MIDI clip. After that I created a new Audio Track and recorded the audio directly from my ASIO soundcard to the Audio Track. Sounds logical, right? While playing along Live’s build in Metronome the recording appeared to be out of time and completely off the grid! Fortunately, I found a solution for this timing problem on Gearslutz: route the audio from the MIDI Track with the external instrument device to the (armed) Audio Track.

Read on if you are still puzzled about how to record your synth with hardly any latency in Ableton Live. For the purpose of this article I recorded a four on the floor kick drum from the Bass Station II synthesizer into an Audio Track. First I created a MIDI Track with an External Instrument device and programmed a MIDI clip. The External Instrument device settings are as follows: 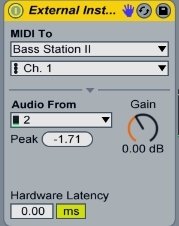 The External Instrument device sends the incoming MIDI to the Bass Station II synthesizer and receives the audio from channel 2 of the audio interface. After recording the audio directly from the soundcard (Buffer Size: 64 samples) into the Audio Track, the kick drum is clearly playing out of time. See the picture below. The waveforms should begin at 1.4 and 2 in the timeline of the audioclip, but they start way too early:

Now the recorded kick drum clip is almost dead on the grid. Here’s the resulting (stereo) clip with the same 64 samples Buffer Size: